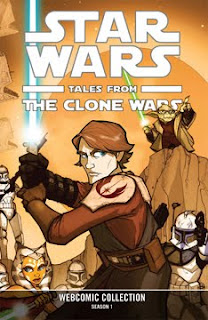 Dreams and Visions Press and Dark Horse Comics are publishing the trade paperback edition of the first season web comics from Starwars.com, titled Star Wars: Tales from the Clone Wars.

This edition will be available at the Art of Tom Hodges booth in conjuction with Dreams and Visions Press at Celebration V this August and then at StarWarsShop.com and Dreams and Visions Press after the event. It includes the entire run of Season One webcomics -- written by Pablo Hidalgo and illustrated by Jeff Carlisle, Katie Cook, Grant Gould and Tom Hodges, as well as the "gameisode" installments that tied into online Flash games following Season One. A bonus section features concept art and development sketches, as well as bonus art from all the artists. This special collected edition includes a foreword by Dave Filoni, supervising director of the television series.